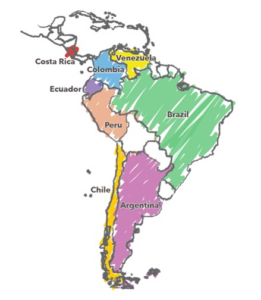 The study was based on a complex and multistage sample design and the sample was stratified by sex, age (15 to 65 years), and socioeconomic level. A small-scale pilot study was conducted in each country to test the procedures and tools.

The general objective of the project is to provide reliable and updated data on the intake of beverages and food and physical activity and its association with the anthropometric profile of a representative sample of the urban population of eight Latin American countries, by region, socioeconomic status, age, and gender. ; and with this provide new scientific evidence for the analysis of the relationship between energy and nutrient intake, energy expenditure and anthropometric measurements.

Below we present the scientific article: DIETARY FIBER CONSUMPTION IN THE COSTARRICAN URBAN POPULATION