Evaluation of the metabolites of the intestinal microbiota in an animal model after the ingestion of a drink rich in bioactive compounds based on blackberry, flaxseed, and soy

The human intestinal tract is populated by 1000-1150 species of bacteria, which constitute the microbiota, and can reach concentrations in a range of 107 to 1012 cells / g of intestinal content (Sanz et al., 2010). The decrease in the microbial diversity of the colon would be associated with different pathologies, such as inflammatory bowel disease, obesity, diabetes, hepatopathies, and cardiometabolic complications (Chen et al., 2014).

The main objective of this research work is the development of a beverage rich in bioactive compounds,

beneficial for health, based on blackberry (as a source of ellagitannins), soy (provides isoflavones) and linseed (contribution of lignans), designed to adult consumers. With this, it would be expected to implement an indirect and novel alternative method to evaluate the effect of the colonic microbiota on the metabolism of the phenolic compounds of interest, provided by the drink elaborated with blackberry, soybean, and linseed.

This project constitutes the first stage of broader research on the issue of healthy aging, which seeks to elucidate whether the intestinal microbiota could be an explanatory factor of the longevity observed in certain regions of the country such as the Nicoya Peninsula.

Develop a beverage rich in bioactive compounds from blackberry, linseed, and soybeans to evaluate the metabolism of the gut microbiota in an animal model.

Tesiaria: there will be the collaboration of a student from the school of Food Engineering of the University of Costa Rica, who through this research would be developing their respective Graduation Thesis.

In the month of August of 2017 a report of activities that have been carried out for the development of the project is presented, to know the report of click here. 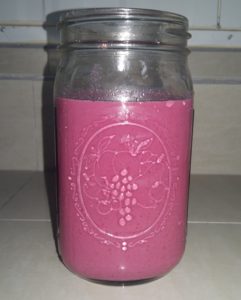 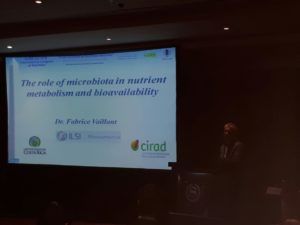 On Tuesday, October 10, 2017, professor and researcher Dr. Fabrice Vaillant, representing the entire project team, gave a presentation on “The role of the microbiota in the metabolism of nutrients and bioavailability”, this in the framework of the XXI International Congress of Nutrition (IUNS-ICN) held in Buenos Aires, Argentina.

If you wish to review Dr. Vaillant’s presentation, you can click here. And to review all the other presentations of this session you can do it here. 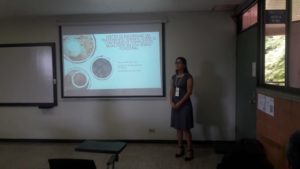 The student of Food Engineering in charge of the development of the drink, Ana Irene Bonilla, presented the results of her research at the V International Congress of Agroindustrial Engineering that took place at the Tecnológico de Costa Rica facilities in San Carlos del 22 to October 27, 2018, the topics presented were:

On November 30, 2018, the student Ana Irene Bonilla who was the assistant during the development of this important project, carried out the defense of her graduation thesis in the Food Engineering career at the University of Costa Rica. The thesis was called: “Development of a functional drink from blackberry, flax, and soybean: evaluation of its sensory acceptance and profile of bioactive compounds.”

The whole family of ILSI Mesoamerica congratulates Engineer Ana Irene for her successful defense and wishes her the greatest success in her future professional career.

In June 2019, the project presents its final report to the Vice-Rector’s Office of the University of Costa Rica. To know the report (in Spanish) you can do it here.

ILSI Mesoamerica thanks all the project researchers for all the enormous work carried out. We also thank and congratulate the student of the Food Engineering career at the University of Costa Rica who achieved the conclusion of her studies thanks to this research.