Aging is an irreversible and involutive biological process, manifested progressively at the cellular, organ, and system levels. Changes in aging, in the absence of the disease, appear continuously, progressively, and in a harmonious way. 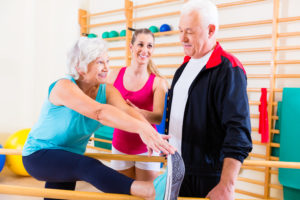 But aging can not be considered as an intrinsic programming process, there are interactions between individual and extrinsic factors, which play an important role, as for example, the environment and the sociological dynamics around older adults, which are capable of weakening the capacity for genetic adaptation to the environment and ultimately affect the vulnerability of the individual.

To understand the dynamics of the elderly population in the world, a broader framework, which describes not only the general demography but also the individual and social consequences of aging. The purpose of the present study is to identify the factors that contribute to the good health of the elderly and to create an aging profile among the participating countries. 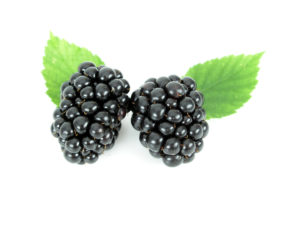 attention in view of their positive effects on human health, mainly related to their antioxidant, anti-inflammatory, cardioprotective and antiproliferative properties, among others (Wu et al. 2004). Most of the polyphenols supplied by the diet are transformed into the colon by the intestinal microbiota before absorption.

This conversion is essential for these compounds to be absorbed and also modulates their biological activity. Likewise, polyphenols are substrates of numerous enzymes located in the intestinal tract and in the liver. As a result, the interaction of the microbiota with polyphenols and its effect on human health has been recently investigated, which has allowed identifying the microorganisms involved in the colonic fermentation of these compounds (Selma et al., 2009).

In the first stage of broader research in the field of healthy aging, a drink based on blackberry, soybean, and

linseed was developed, which contains bioactive compounds, more specifically polyphenols from the class of ellagitannins, isoflavones, and lignans. Subsequently, the metabolites produced in urine were studied in a model with adult Wistar rats, after the ingestion of the developed beverage, by means of a metabolomic analysis. This model drink will be used to continue research on the subject of healthy aging in order to compare the composition of the microbiota in adult residents of the Nicoya Peninsula and the Greater Metropolitan Area (GAM).

The expected results will also establish the effect of the intestinal microbiota, the influence of other parameters such as the type of food and physical activity. For this, an evaluation of the current nutritional situation of the adults participating in the study will be carried out, as well as an analysis of the food consumption in retrospect in order to have a broader view about the role of nutrition in the topic of healthy aging. In addition to determining the physical activity habits of the participants.

To evaluate the intestinal microbiota and the nutritional situation of adults of the Peninsula of Nicoya and the Great Metropolitan Area (GAM) of Costa Rica.

Project’s duration: The project will last 36 months starting in July 2019 and ending in June 2022.

Advances in the project:

During the months of June to September 2019, the first part of the project was carried out, which consisted of developing a descriptive study with the objective of concentrating the epidemiological information on the profiles (demography, lifestyle habits, health, education, environment). environment and household economy) of people aged 60 and over, for this the collaboration of the Nutritionists, Dras. Georgina Gómez and Katrina Heredia.

On Monday, August 14, 2017, the first field trip to the city of Nicoya took place. The objective of the tour was to meet three seniors ages over 100 years to validate through a small interview valuable food-nutritional information for research. 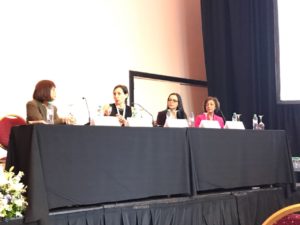 On October 16, 2017, Dr. Hannia Leon, Executive Director of ILSI Mesoamerica, had the opportunity to lead the conversation “Aging with Grace: Staying healthy and well late in life”, at the XXI International Nutrition Congress (UINS-ICN) carried out in Buenos Aires, Argentina. This being part of the participation of ILSI Global and ILSI Mesoamerica in said Congress. In addition, Dr. Leon gave an introductory presentation to the conversation entitled “Importance of understanding healthy aging.”

If you wish to review Dr. Leon’s presentation, you can do so here, and to review all the other presentations that were carried out in the discussion you can access them here.

During the month of June 2019, fieldwork begins in the province of Guanacaste, Costa Rica. The first tour was aimed at knowing and determining the participants that would be used in the study. 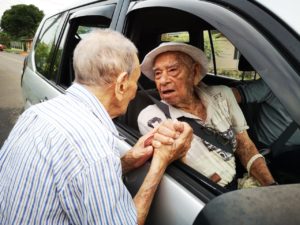 During the months of July and August of 2019, the second tour of the research is carried out, whose objective was to carry out the assessment of the nutritional status of the participating older adults, for this, anthropometric measures were taken and guided surveys of food consumption, this in order to rebuild the food history of the participants.

This stage of the investigation was in charge of the student of the School of Nutrition of the University of Costa Rica, Laura Vindas, who in addition to providing a great contribution to this project, managed to enroll and complete the subject to be accepted as her thesis of graduation.

During the month of October 2019, one of the most complex tours in terms of logistics and transfers takes place, since several researchers involved in the project we’re working on simultaneously. During this tour blood samples, feces were taken and physical exams were done on the elderly.

During the Ordinary General Assembly of ILSI Mesoamerica in February 2020, the project coordinator Ing. Ana Irene Bonilla made a presentation of the progress made in the project until 2019 and commented on the stage that will begin to develop in 2020

In addition, Ana Irene had a presentation at the Meeting in Latin American Entities that was held during the ILSI Annual Meeting in January in Costa Rica.

During the month of October, the first Webinar called Zona Azul de Nicoya: Factors associated with healthy aging was held. Several of the researchers participated in this event and had an audience of around 120 people. To see the videos of the 2 days you can do it here 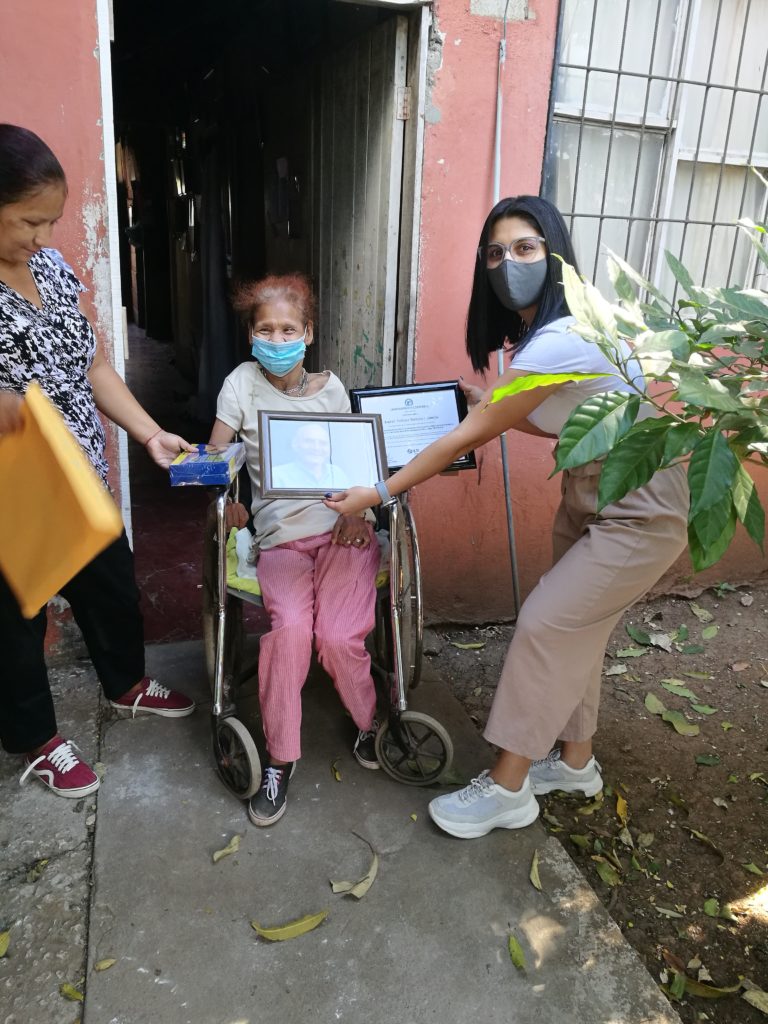 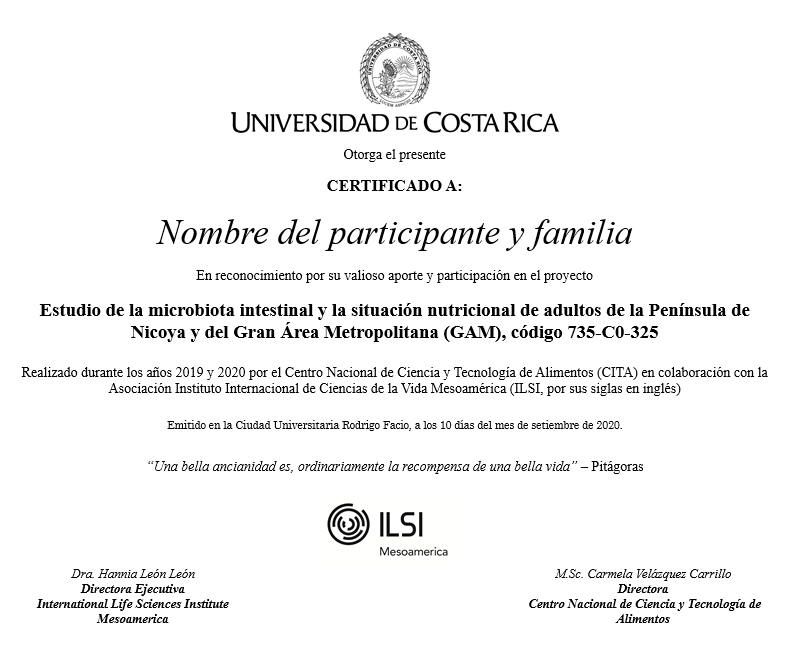 On January 27 and 28, 2021, a tour was carried out where all the centenarians and their families were given a small recognition for their participation in the project.

In compliance with all the protocols of the Ministry of Health, they were given a framed photograph and an acknowledgment by the University of Costa Rica, as shown below.