Central American Network of applied research in childhood and adolescence in human movement and health.

The proposal that integrates the applied research efforts between the Universities and the Central American Ministries of Education in the promotion of school health, using as the main tool the human movement and related areas.

The work of this project includes: creating models of sustainable development, where training, promotion, and prevention are the elements that help create children and adolescents on the move.

In addition, to provide a real living space, which results in a formation more attached to the problems facing the region in school health, promoting a community exchange of experiences in Central America, to promote and promote the human movement and health in childhood and adolescence.

Develop a network of applied research in childhood and adolescence, in the fields of human movement, psychomotricity and health where: promote, direct, execute and disseminate research on social impact in health and human movement, in order to support decision-making and the formulation of policies, strategies and impact interventions.

Dr. Carlos Álvarez Bogantes, School of Sciences of the Human Movement and Quality of Life, National University of Costa Rica.

MSc. Emmanuel Herrera González, School of Sciences of the Human Movement and Quality of Life, National University of Costa Rica.

During 2016 the researchers and assistants of the Central American Network project have invited a series of Universities from the region to participate in this great initiative. Here we present the educational institutions that will support us in the research: 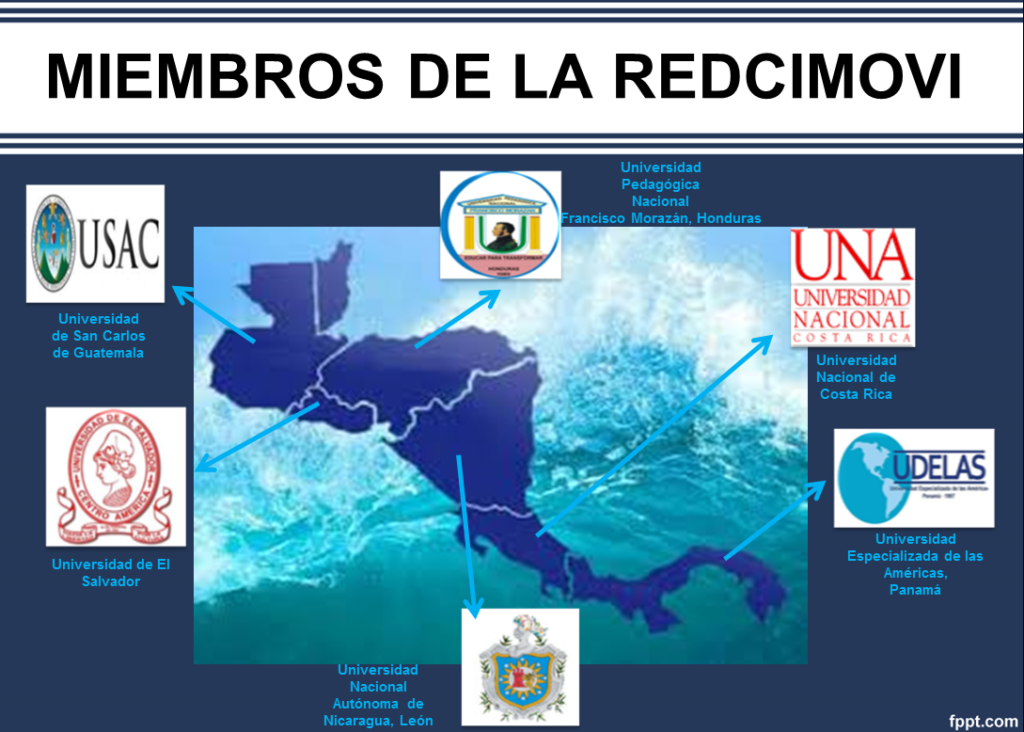 From January 2017 to February 2017, the coordinators of the project have visited the universities that will collaborate in the research, in order to further strengthen the bonds of friendship and collaboration. Photo gallery of the visits.

On February 15, 2017, the official launch of the REDCIMOVI project was carried out at the facilities of the 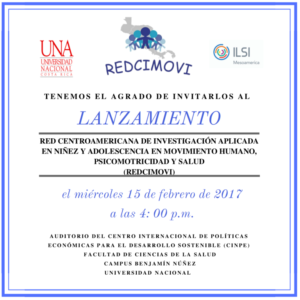 For this special occasion, the presentation was made of the people who will be the researchers representing each University, if you want to know them you can do it here, also they present us with the following presentation-motivation videos (Spanish version).

In addition, several media made press releases where they made this great project known (Spanish version):

From July 26 to 28, 2017, the First Encounter of the Central American Network of Applied Research in childhood and adolescence in human movement, psychomotricity and health was held. The objective of this event was to coordinate in a technical way each one of the investigations that will be carried out in each member country of the Network.

During the first semester of the year the research assistant Lic. María Fernanda Herrera and Professor Carlos Álvarez have been visiting the member universities of REDCIMOVI in order to carry out a research workshop where they are trained on topics related to the clothing of results and development of the discussion of a scientific article.

The idea is to provide them with the key points so that a document with all the necessary characteristics can be developed so that it can be published in a scientific journal. Photo gallery of the visits.

During the last months, the researchers of the 6 Central American Universities involved in the project have compiled a series of information that will be very valuable for the decision making on future lines of action on issues of overweight, obesity, self-esteem, among others.

On July 16, 2018, the REDCIMOVI coordinators in Costa Rica presented the first results obtained in Costa Rica and in the rest of Central America. Read more…

The Lic. María Fernanda Herrera, REDCIMOVI researcher for Costa Rica had the opportunity to talk with different media about the data thrown by the project. Then we present a live interview (in Spanish) made in the newscast Telenoticias channel 7. 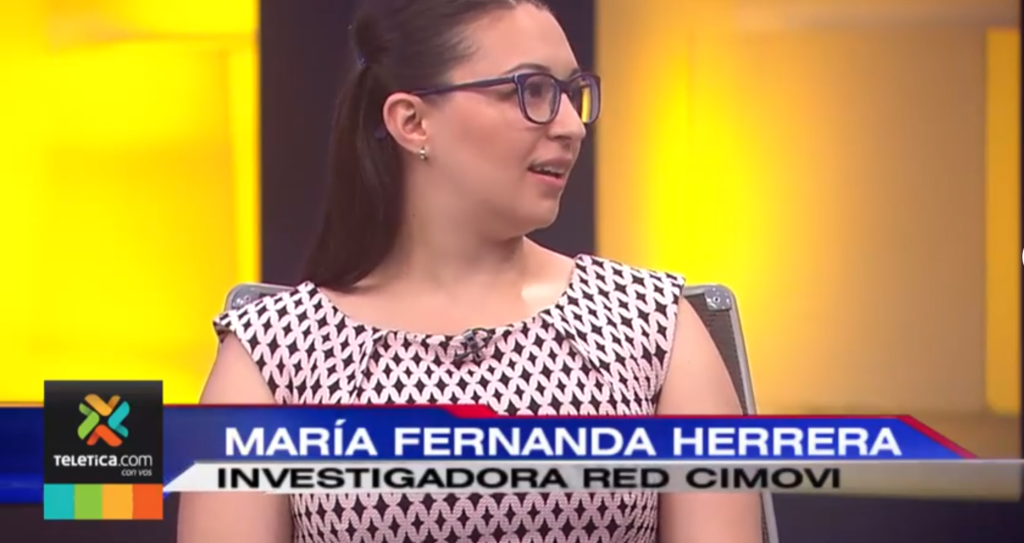 Below are the notes (in Spanish) presented by various media: 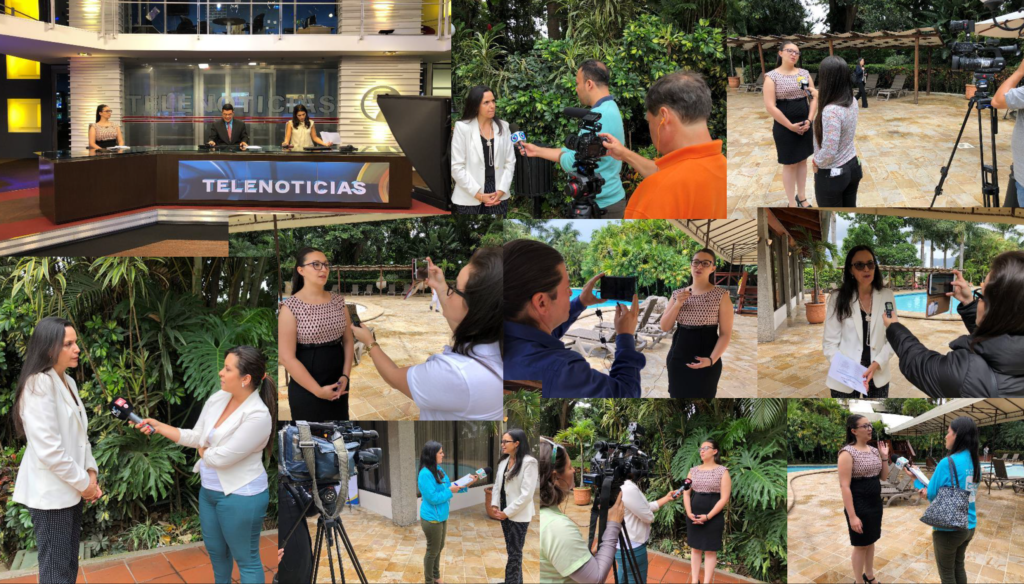 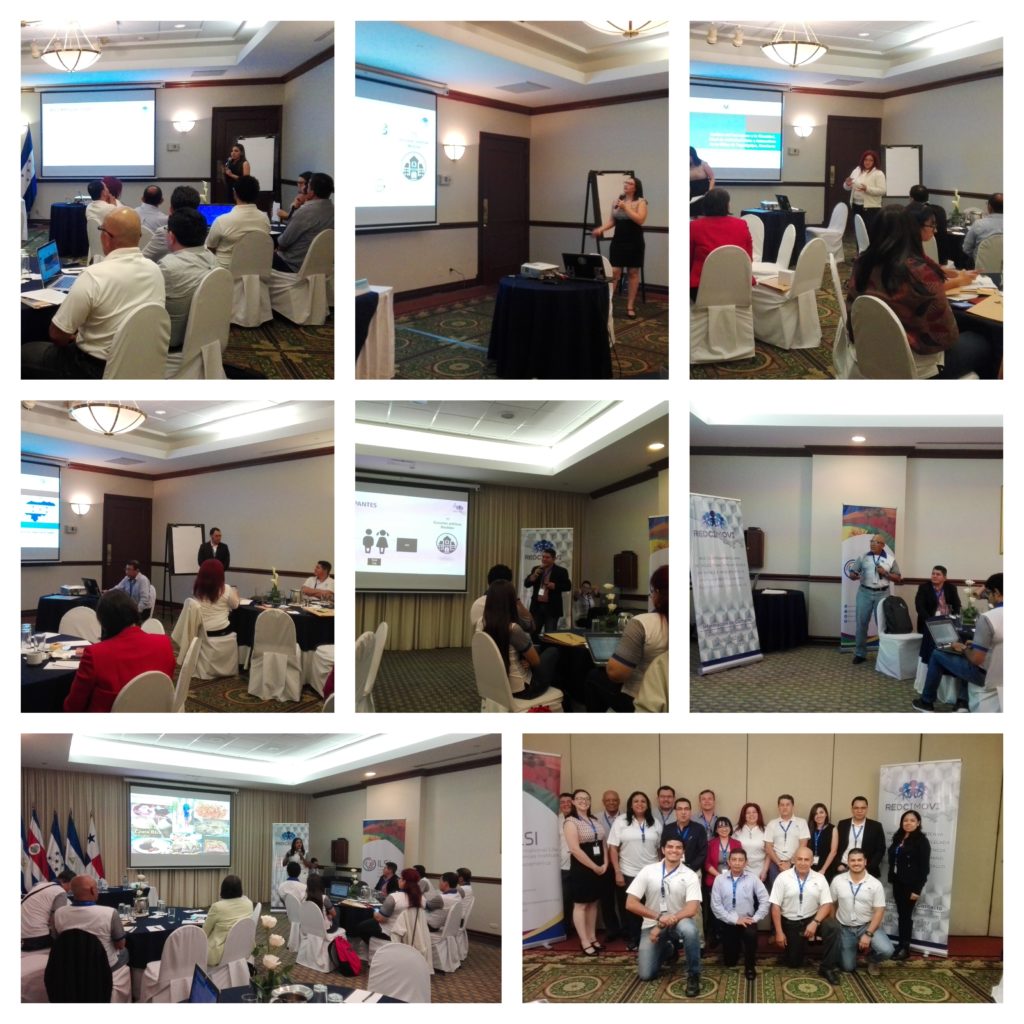 From August 29 to 31, 2018, REDCIMOVI carried out the II Meeting called the Symposium of Good Research Practices. Each university, through its principal investigator, had the opportunity to present the data of the research carried out between 2017 and 2018.

A total of 5,291 children from the II cycle of basic general education were studied in a total of 74 schools throughout Central America. Once the diagnostic stage was completed, the researchers committed to working on the construction of the intervention proposal, this as an II stage of the project. The purpose will be to carry out interventions to try to counteract the data obtained. Here you can see the gallery of photos of the event.

The University of San Carlos of Guatemala (USAC) released information about the event through the following link (Spanish version): https://elsancarlistau.com/2018/08/30/dan-a-conocer-indices-sobre-obesidad-sedentarismo-y-autoestima/

The researcher from the University of San Carlos of Guatemala has participated in interviews where he has released the results of the research.

One of the interviews was on USAC Radio from the same university.

On October 30, 2018, researchers from the Department of Physical Education of the National Pedagogical University Francisco Morazán (UPNFM) at the Tegucigalpa, Honduras headquarters carried out the presentation of the results of the REDCIMOVI project. The activity was attended by representatives of the University. 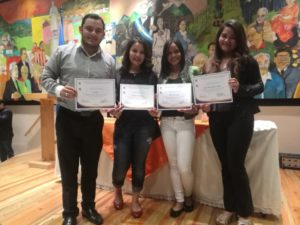 In addition, the occasion was used to give deserved recognition to the team that was collaborating at all times with the project. These young people were trained in taking measurements, traveled to schools to collect information with the team, helped in the search for information and participated in the research workshops. You can see some photos here. 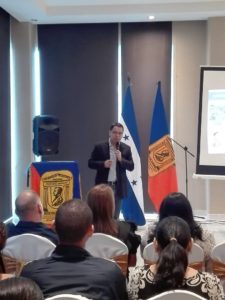 On November 16, researchers from the Department of Physical Education of the National Pedagogical University Francisco Morazán (UPNFM) at the San Pedro Sula, Honduras, headquarters carried out the presentation of the results of the REDCIMOVI project. The activity was attended by representatives of the University and various media.

On November 16, 2018, the first publication of a scientific article by REDCIMOVI was made. This was carried out in the MHSalud magazine of the National University of Costa Rica and is titled Analysis of overweight, obesity, levels of physical activity and self-esteem of children in León, Nicaragua 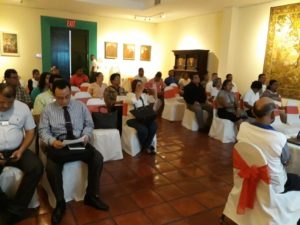 On November 23 it was the turn of the researchers from the National Autonomous University of Nicaragua, León, to carry out the presentation of the data obtained in the REDCIMOVI project.

For this activity, university authorities, representatives of the Ministry of Health and Physical Education teachers participated. 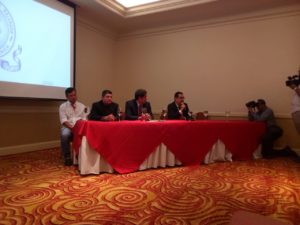 On November 28, the presentation of the results of REDCIMOVI was carried out by researchers from the Department of Education Sciences of the Faculty of Sciences and Humanities of the University of El Salvador (UES).

In the newspaper of the University, a note was published about this presentation, in the following link you can see the complete one (Spanish version): http://www.eluniversitario.ues.edu.sv/6582-ninos-salvadorenos-con-nivel-de-autoestima-mas-baja-de-centroamerica-de-acuerdo-a-estudio-de-la-ues

On February 27, 2019, the presentation of the results of REDCIMOVI was carried out by researchers from the Specialized University of the Americas (UDELAS) in Panama.

The activity was attended by representatives of the Ministry of Health, the Ministry of Education and university authorities. In addition to researchers and other collaborators of the process. 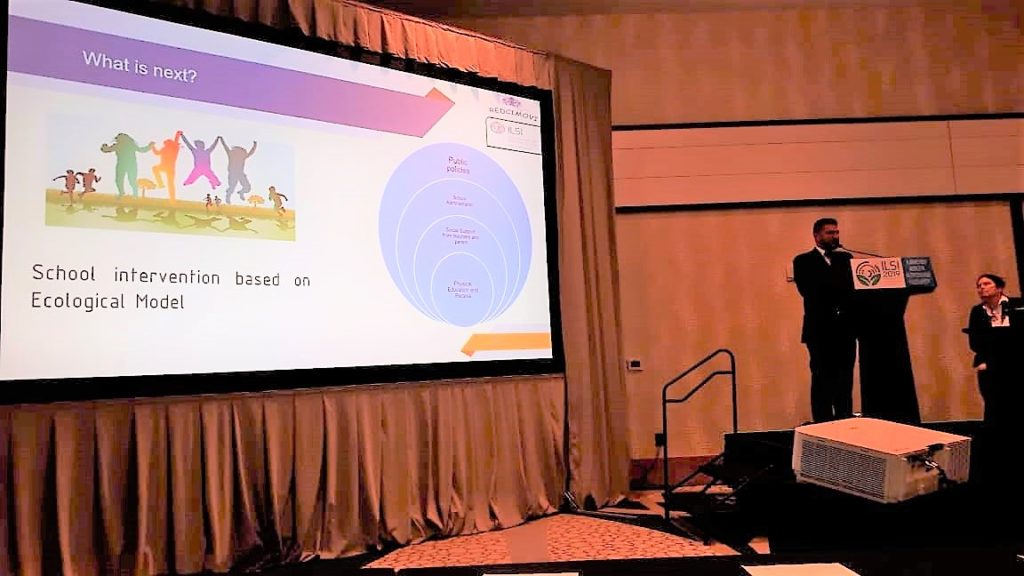 During the ILSI Annual Meeting in Clearwater, Florida, USA, Professor Emmanuel Herrera González of the National University of Costa Rica won the Malaspina International Scholarship with the REDCIMOVI project.

During the session, he had the opportunity to present to all attendees this research project that includes five universities in Central America

To watch the video of the presentation you can do it here.

On June 17, 2019, a new publication of a scientific article based on the data collected in the REDCIMOVI research is carried out, again given in the MHShealth magazine of the National University of Costa Rica and corresponds to the San data Pedro Sula, Honduras.

The article is entitled Analysis of overweight and obesity, levels of physical activity and self-esteem in schoolchildren in San Pedro Sula, Honduras 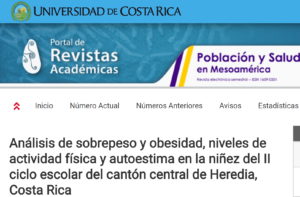 On June 28, 2019, it is up to Costa Rica to present the results of its research and it does so through the publication of the article in the journal Population and Health in Mesoamerica (PSM) of the University of Costa Rica.

The article is called Analysis of overweight and obesity, levels of physical activity and self-esteem in childhood of the II school year of the central canton of Heredia, Costa Rica

In the month of September 2019, the scientific article called Overweight, obesity, levels of physical activity and self-esteem of Central American children is published: a comparative analysis between countries in the Spanish Magazine CHALLENGES: new trends in Physical Education, Sports, and Recreation.

In January 2020, a new scientific article was published in the Education Magazine of the University of Costa Rica.

The article is called Physical Activity Levels at School: Use of the System for Observing Play and Leisure Activity in Youth (SOPLAY)

In May 2020 the scientific article called Analysis of overweight and obesity, levels of physical activity, and self-esteem of Salvadoran children was published in the MH Salud Magazine of the National University.

In July 2020 the scientific article called Analysis of Overweight, Obesity, Physical Activity, and Self-Estimation of Children in the Metropolitan Area of the Educational Region of Panama City, Panama, was published in the MH Salud Magazine of the National University.

The teachers in charge of the REDCIMOVI project present the final report of the first stage. To know the report in Spanish you can do it here.

ILSI Mesoamerica thanks and congratulates all the researchers of the project of each of the universities involved, as well as the assistants and all those people who made this project a success. Thank you very much for your dedication and desire to work as a team.

We are waiting for you in the II Stage of REDCIMOVI

If you want to know more about the project of the Central American Network, you can do it through: 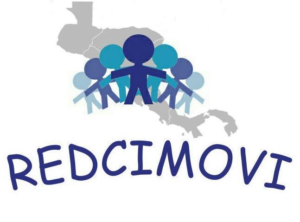